Over the last few months, I have noticed, as an Instagram user, many suspicious-looking ads on the platform, and recently these ads have moved from suspect to outright fraudulent. Ads showing one product and shipping a far inferior version are commonplace, and as a target of these ads, all I can do is report them and hope Instagram will review them.

Recently, I’ve noticed a new trend of companies that advertise nonexistent products going as far as creating websites to support their fraud only to disappear a few weeks later. That leaves Instagram purchasers to navigate the complexities of refunds from their credit card companies or, God forbid, PayPal. To be completely honest, I fell for a couple of these. One was for a Nano Screen Protector, which would allow your iPhone to crack walnuts and not be scratched. The other was a carbon fiber camera tripod I’ve been coveting from Peak Design. The tripod retails for about $700 (I know I have a problem, I’m in a group for that), but when I saw it advertised on Instagram for hundreds less, I bought it. Unfortunately, it wasn’t until later that the synapses fired off.

After some research and communication with Peak Design, it was clear that the ad and the supporting website were utterly false. The thief had simply stolen all of the content from Peak’s site and pretended to be a reseller. I’m still going through an incredibly draconian process with PayPal to get my money back, but the counterfeit seller has really figured out how to game the system and make that almost impossible.

Subsequently, I have gone through a period of about four weeks looking for suspect ads, researching their offerings, and reporting the advertisers to Instagram when warranted. To their credit, I have received several responses from Instagram stating that “The ad you reported violated our Ad Guidelines and has been removed;” however, in most cases, this just initiated a game of “Account Whack-a-Mole.”

The underlying problem is that Instagram has zero incentive to stop this type of activity; in fact, they have an incentive to perpetuate it since they make money on every click. 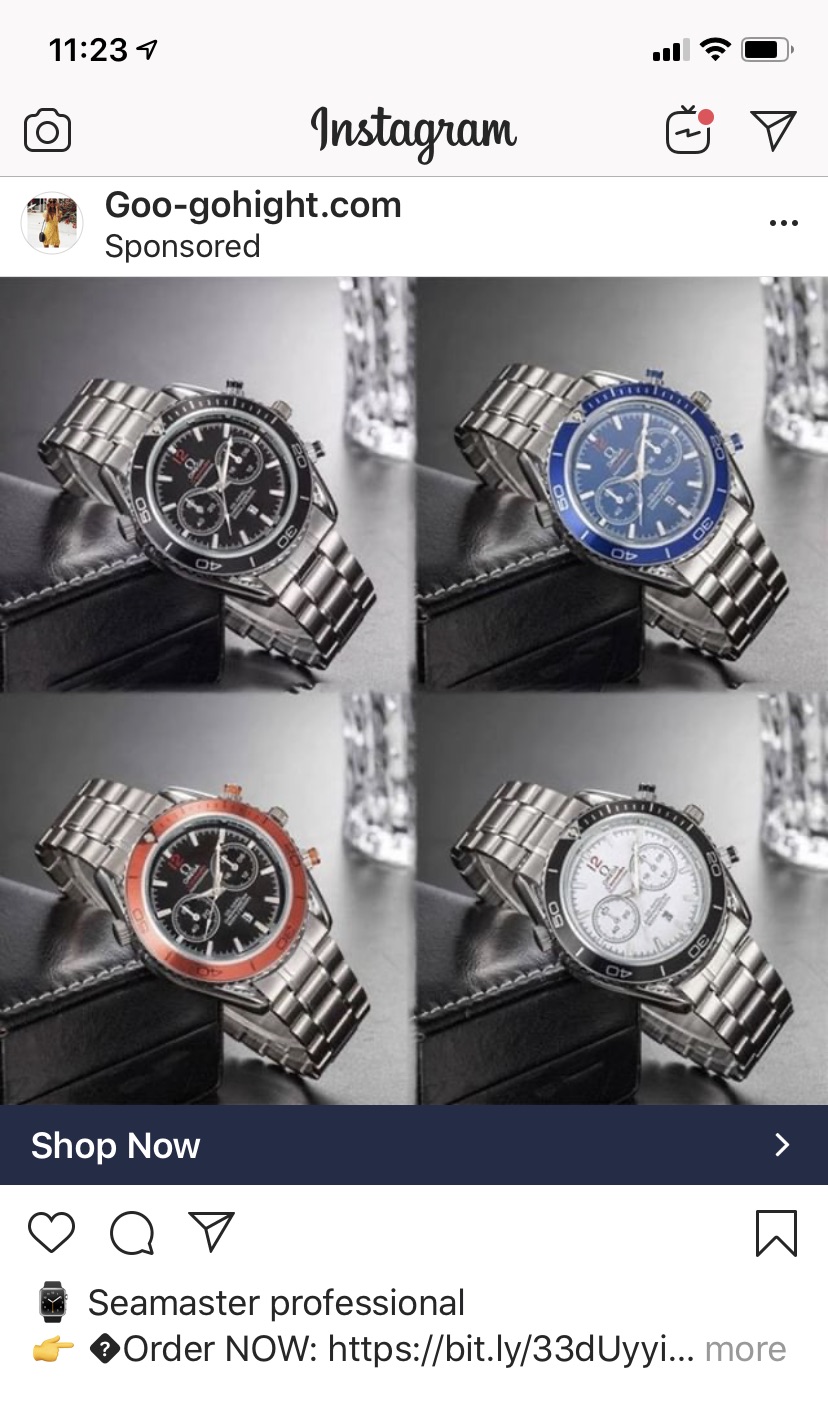 For celebrities and brands, Instagram offers a verification process that yields a coveted “verified” checkmark next to the account name indicating its legitimacy. The process is well documented, and all parties take it very seriously.

This verification process has been in existence for an extended time, it keeps unscrupulous people from impersonating others, and helps verified accounts protect their brand from those who might use their name or image for an illicit activity or ill-gotten gains.

Why doesn’t Instagram create and apply an advertiser verification process for those who want to become verified and give themselves an advantage in the “click” game?

There is no reason Instagram can’t do this; they just have to “want to,” and there’s the rub. They make money from every click even if the sponsor is stealing from their users.

Instagram should take the side of their users and intervene. There should be an opportunity for Advertisers to become verified and display that they have been vetted. As part of this, Instagram should create a standard that requires all verified advertising to adhere to all government regulations regarding claims of product performance or benefit.

The outlines for this process are already set forth by the FTC and the FDA. This brings Instagram into the general realm of compliance, where other publishers and media outlets live. It may not be a perfect step, but is it a step forward.

The real problem for Instagram: we are the product; they are selling access to our eyeballs and bank accounts. I’m by no means the first to float this assertion, but viewing the relationship this way makes it is easy to understand why the platform has little incentive to address this issue.

How about it Instagram…you willing to step up?